The unique principle of operation of gears, from which the name Strain Wave Gearing is derived, was patented in 1955, by its inventor, C.Walton Musser. Initially this new gear concept was applied in aerospace and other highly specific applications.

All strain wave gearing products employ the same three basic elements: a Circular Spline, a Flexspline and a Wave Generator. Although these elements may take alternate forms depending on their application, the types described here are typical and representative

WAVE GENERATOR (WG)
The Wave Generator is an elliptical cam enclosed in an antifriction ballbearing assembly. It normally functions as the rotating input element. When inserted into the bore of the Flexspline, it imparts its elliptical shape to the Flexspline, causing the external teeth of the Flexspline to engage with the internal teeth of the Circular Spline at two equally spaced areas 180 degrees apart on their respective circumferences, thus forming a positive gear mesh at these points of engagement.

FLEXSPLINE (FS)
The externally toothed Flexspline is a nonrigid or flexible, thin-walled, cylindrical cup which is smaller in circumference and has two less teeth than the Circular Spline. It is normally the rotating output element but can be utilized as the fixed, non rotating member when output is through the Circular Spline.

CIRCULAR SPLINE (CS)
The Circular Spline is a thick-walled, rigid ring with internal spline teeth. It normally functions as the fixed or non rotating member but can, in certain applications, be utilized as a rotating output element as well.

The Principles of Strain Wave Gearing

The diagram shows the three basic strain wave gearing elements (Circular Spline, Flexspline and Wave generator) assembled in a normal configuration. Ordinarily, the Circular Spline is held stationary or fixed and input is through the Wave generator, while output is via the Flexspline. Under these circumstances, operation of the strain wave gearing unit is as follows. 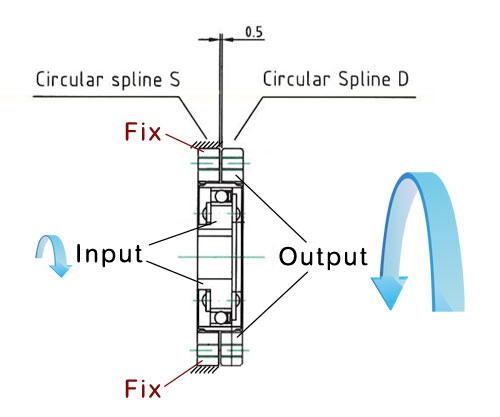